"Government is an insurance company with an army"

Paul Krugman says it best: "Where is the waste?"

The US government is basically two organizations: an insurance company, and an army.

The insurance company part of it is run quite efficiently. From what I know of large companies (and small), the US government is run more efficiently than most US companies, and is definitely more efficient than corporations in many other parts of the world. About the army part, I don't know enough to comment.

I wish enough people were giving credit to the US government for its professionalism and efficiency. More importantly, I wish corporations could start taking lessons from it. There's a lot to learn here...

It is a tough time for democracy in India and the US. Each country is currently governed by a left-of-center party, each with a glorious history of helping empower citizens. Yet, while the amazing events of the Arab Spring have been unfolding, these two great democracies seem to be regressing and heading in the wrong direction.

My observations here are based on press reports only, so I don't know how much value/relevance my ideas have.

In the US, the Occupy movement was a grassroots initiative that held a lot of promise for a new type of consciousness -- an authentic 21st-century, egalitarian, progressive view of the world. A movement without leaders, Occupy managed to capture the country and the world's imagination. It was led and directed by a younger, and more idealistic, post-Cold War generation.

Tragically, though, the movement was completely destroyed and the protestors were forcibly evicted from their protest sites. As it was clear then, and is clearer now, the entire might of the government was put to work to destroy this movement.

In India, both the Anna Hazare movement, and the movement to protest the rape of a 23-year-old student in Delhi, were led mostly by young, idealistic, and intelligent people with a very 21st century worldview. These movements were also sabotaged and brutally crushed.

These are failures of democracy. In a world where all protests and events are reported in real time, democratic governments cannot get away with water cannons, batons, and other "traditional" forms of intimidation. Slightly more insidious techniques (like evicting protestors, not allowing assembly, shutting down public transportation and access) will work only marginally better.

What baffles me is this: Barack Obama's administration, for example, is Internet savvy -- they raised millions online. The President himself has a solid grounding in grassroots action. And yet, the same administration is trying to quell a grassroots operation in plain sight of the Internet. What's wrong with these guys?

What's wrong with this picture

From the Wall Street Journal story on high speed passenger rail in the US.

Every serious writer has to be original; he cannot be content to do or to offer a version of what has been done before. And every serious writer as a result becomes aware of this question of form; because he knows that however much he might have been educated and stimulated by the writers he has read or reads, the forms matched the experience of those writers, and do not strictly suit his own.
- V.S. Naipaul (Hat tip: Thirty letters in my name)

True for entrepreneurship too.
Link

How I sold my Toyota Corolla 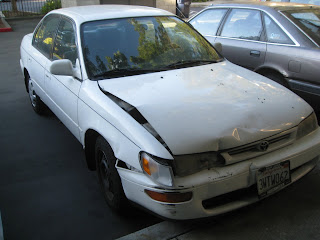 As readers of this blog already know, I crashed our Corolla into a truck a couple of months back. The car was in pretty bad shape after the accident, and was barely drivable. We were trying to figure out what to do with it. If we donated it, the organization which received the car would try to sell it via an auction. If the car managed to sell in the auction, the organization would get 65% of the proceeds; if it didn't, they'd get $60 or some measly sum like that.

Our mechanic advised us to advertise it on Craigslist "as is" and so we did. We put all the pictures and the gory details online. Buyer beware and all that.

The Craigslist ad went out on a Saturday evening. The response was immediate. A dozen emails popped up in my inbox within about 30 minutes, and more followed by nighttime.

Some of the emails had their offers spelled out -- $400 from one, $900 from another. They didn't need to see the car -- the pictures were sufficient for them.

Quite a few of the names of emailers were Muslim-sounding too. I was intrigued.

I spoke to a couple of the correspondents. The first guy explained the story -- Corollas, he said, were very popular in Afghanistan. He was going to ship it there. He mentioned something about $2,500 being his upper limit. He didn't need to see the car. He would come by with $1,200 in cash right away and buy it off of me. I suggested he come by the next day with all the others. He feared that he'd be getting into a bidding war "with the same people" whom he competes with for other Corollas.

The second guy also wanted us to sell him the car the same day. He said he'd seen a few fistfights break out over other Corollas. "When they're done beating each other up, those guys would come after you and beat you up too." This was getting more exciting.

Ten years ago, whenever I flew domestically within the US, I thought the security level was exceptionally low. You could pretty much walk up to to the gate to drop/receive the travelers. The carry-on baggage checks were perfunctory, and the traveler herself went thru no checks at all.

9/11 changed all that, and we had high security theater for a while, with travelers being put thru a variety of checks, and all sorts of new technology tried at different airports, who were all looking for expensive ways to spend all the new Homeland Security $$.

The security theater is pretty much over. What we currently have has a bit of a theatrical element to it, and security experts will find 1001 ways to fault it, but it seems reasonable and passes the smell test for me. Airports have also been streamlined to handle the current set of procedures.

But unfortunately, the security pendulum cannot stop: it has to keep swinging, and now it's swinging in the other direction. Even seemingly good ideas are being criticized now and we will soon -- in the next 10-15 years, say -- find ourselves in the same place where we were prior to 9/11. This LA Times story, for example, is titled "CIA staged mock execution, wielded power drill in interrogations, secret report says."

Maybe I'm naive about how police states are created, but shouldn't mock executions (or mock anything for that matter) be allowed in interrogations of some of the most dangerous people on Earth? To me, this is definitely not remotely close to torture.

It's depressing how the security pendulum is almost inexorably swinging to the laxer extreme again.
Link

Our penchant for acronyms

Indians love their acronyms or "short forms." Here is a good example... On the left is a headline on CNN's homepage, on the right is one from the Times of India.